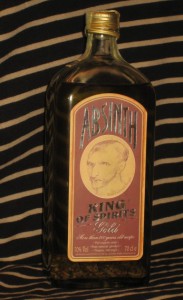 Note: This is a Czech absinthe which is usually quite different from the French varieties in both taste, strength and method of serving. (They like to soak the sugar cube in absinthe and set it on fire). We usually evaluate French and Czech absinthe as two entirely different styles/expressions.

This particular absinthe has a lot of hype behind it -about the level of thujone, how great it is, the label says “For Expert Only,” etc., one site even boasts of the level of neurotoxity. Oh boy! Bragging about brain damage- one way to sell a product.

Appearance: Kind of a pond scum green,or maybe radiator fluid or deicing fluid with bits of chopped up absinthe in it.On swirling, leaves a thin coat on the glass with scalloping and very thin legs, developing. Adding water rather than making it louch (opalesce) causes the oil to separate in a disquieting manner-kind of a oil and water look- pond water and oil.

Taste:OH- MY- GOD !! Tastes like Shazeez Liquor (landing gear fluid tapped from a MIG) mixed with a hellbroth of turpentine, pine oil and soap. No- too bitter to have used soap- it would have improved the taste. Bitter,corrosive and foul. Reminds me of the WW II and earlier rifle bore cleaners (for the chemistry types we are talking cresylic acid, methylene chloride, nitrobenzene and xylene). Don’t breathe for as long as possible after drinking this – you will choke on the fumes. My tongue feels like it has curled up and died- or wants to.

Drinks: The French absinthe ritual involves water fountains, sugar, spoons, and you pour the absinthe in the glass then put the spoon over the glass put a sugar cube on it and drip water from a purpose built fountain over until it louches (opalesces, turns cloudy etc.,) and the right amount of dilution (to personal taste-variable) is reached.

The Czech method is more fraught with danger (especially if you have had a few already) as it involves fire and highly combustible liquids. You put the spoon over an empty glass then place the sugar cube on the spoon, then pour the absinthe over the sugar,soaking it thoroughly and then torch the sugar cube, letting it burn down and caramelize the sugar, you then pour the water over the remains of the sugar cube and stir it in. Photos of this particular method are available on absintheium.com. Caution must be exercised to avoid spilling the flaming liquid or having the glass shatter from the heat. Frankly I find the Czech method showy, dangerous, and tedious, all at once.

Bottle: Clear glass looks like a pharmacy or olive oil bottle – rectangular with curved to neck shoulder and indented sides for better grip..

Final Thoughts: Most Czech absinthe we have come across was a nasty hellbroth of wormwood, questionable dyes, and industrial alcohol. Also most of it doesn’t even louche properly, making me wonder what they’re actually made of. This was all of the above and more except the dyes. “Traditional,”as drunk by Toulouse Latrec or Hemingway? They must be kidding….This contains no anise- probably not much more than just straight up absinthe oil and badly made industrial solvent grade alcohol. For the price of 3-6 bottles of drinkable, possibly excellent absinthe depending which ones where you get them.

Why would anyone put a hellishly bitter herb to steep in high proof alcohol for months to steep and over extract ? I don’t know if you get high from this stuff-Obviously they are approaching it from the brute chemical force angle- but it is SO UNDRINKABLE I would defy anyone to drink enough to feel anything other than poisoned. Speaking of which excuse me while I reach for the ipecac and charcoal . ..
Website: http://www.feeverte.net/guide/country/czech-republic/absinth_king_of_spirits_1/

For another REAL point by point review of this foul liquid.